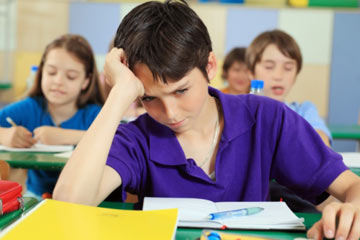 My son Raj is 14 years old and there is a constant complain from him that he does not like to go to school. He says that there is nothing worthwhile taught in school these days and that the teachers are not taking interest as before. He feels that the schools are just a moneymaking business for the trustees and that very little is done in the name of education. I also went to his principal but she was also unaware about the guidelines that a teacher should have in the development of a child. Can you give guidance on this topic?

The school needs to be taken as an extension of the family. If parents were able to undertake the education of their children, there would be no need for schools. However, due to our present day complex demands, schools are needed to lighten the workload of parents and build on what they have begun. Social integration demands a higher level of education than can be given in homes. The aim for the teachers is not only to train children to earn their living but also to work in ways beneficial to humankind. Teachers must be conscious of the importance of this task and be trained to fulfill it. The most important task is the importance of character training. Many children come to schools having already failed in family life and they go on making the same mistakes, in spite of all the lectures and exhortations they receive. These children, when they go to school face a new test in social life, a test that will reveal any shortcomings in their development. They must now cooperate in a wider field than before. If they have been pampered at home, they may be unwilling to leave their sheltered life and join in with the other children. They may be disinterested in school and in the classroom. It is difficult for them to listen to what is being said, because they are thinking of themselves all the time. Due to this self-interested manner, they are unable to make progress in school. These children will have no problems at home but the trouble arises only when they are at school. The answer is apparent: they are in a favorable situation at home and there are no tests, the mistakes in their development are not apparent. At school, they are no longer indulged and consequently experience their situation as a defeat. The second task for the teachers is to notice the child’s difficulties and correct the parents’ mistakes. Some children may not be intellectually retarded but are unable to adjust to social life and the teachers are in the best position to help them meet what is in fact a new situation for them. Here the role of a teacher is that of a family caretaker – mother or father – bond with the children and gain their attention. This cannot be done through severity or punishment. If the child comes to school and finds it difficult to relate to his teachers and fellow pupils, the worst possible thing is to criticize and scold him. This would only confirm that he was right to dislike school. He would look for ways to get out of the situation and avoid school altogether. It is mainly the children for whom school is made an artificially unpleasant environment who play truant, perform poorly and appear stupid or difficult to handle. They are not stupid; they display great ingenuity in making up excuses for not attending school. The third task is to get the child interested in learning. For that, they must discover what the child’s interests are and convince him to make a success of those interests. Once he feels confident about one subject, it is easier to stimulate his interest in others. Any subject should be taught in the context of the rest of his life, so that the child can see the purpose of the instruction and the practical value of what he is learning. There should be a combination of teaching children to absorb facts and to think for themselves. The next task for the teacher is to teach cooperation and handle competition in the classroom. Children are better prepared for competition rather than cooperation. Some surge ahead and strain to beat other children while some fall behind and give up the struggle; both these behaviors are disasters because the children are primarily interested in themselves. Their primary objective is to obtain what they can for themselves. The teacher has to train the child so that he is interested in others and enjoy cooperation. This can help him to change his attitude through interest and cooperation. One common situation is when a child performs badly at school, is scolded for it there; takes the report home and is punished again. One experience is discouraging enough; to experience double the punishment is cruelty. Such a child would be an under-achiever and disruptive. The task of the teacher is to understand his perception of the whole world as hostile and help him to get over it. Another important task of the teacher is to help in assessing the development level of the child. The greatest problem in education is posed, not by the limitations of the child but by what he thinks his limitations are. If a child thinks he is intellectually behind, he loses hope and believes that success is beyond him. The teacher has to direct her energies towards increasing the confidence and interest of the child in removing the limits, which he has set on his own powers. The child himself has quite a sound judgment about his abilities but the mistake is to believe that he cannot do better. He sees others ahead of him and believes that he cannot catch up. A fixation of this idea can dog him throughout his life. Even as an adult he will calculate his position in relation to others and assume that he is lagging behind. The task of the teacher is to help him overcome this belief.

(To be continued next week)

I am Ami Kameshwari, a 23 year old from Jaipur. I got married to Neil…

My husband Vikram, 38 years old, a commerce graduate has a gambling problem. He has…

I am an 18–year-old girl, Karishma. My parents are having conflicts from the day they…