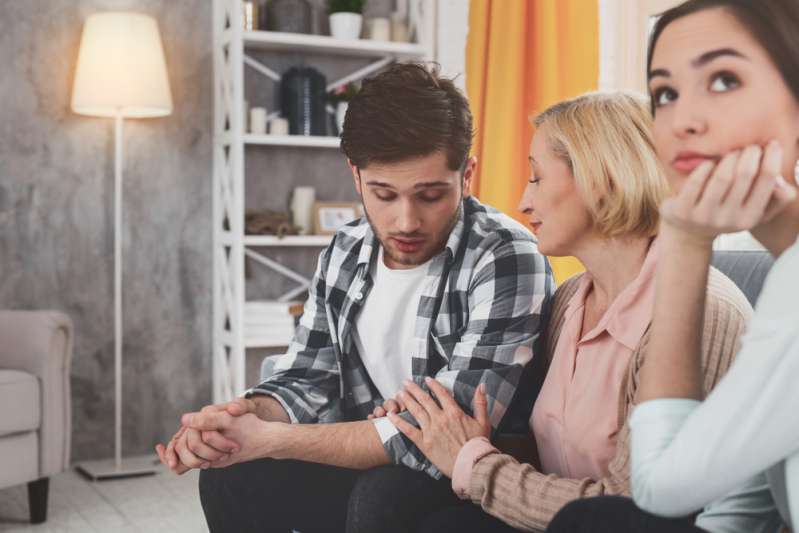 Last week we looked at Karandeep Singh’s problems with a Mama’s boy as her husband.

In the absence of serious issues like alcoholism, physical/sexual abuse, schizophrenic or mental illnesses, impotence or infidelity, the adjustment problems are generally considered to be your weakness than anything else and you may be wary of facing these problems. When you think of options, you feel miserable because it may appear that there is only the option of divorce. Well, with a mama’s boy, the options can be manifold. The first option is of course living separately from the house of the in-laws. You will meet with a tremendous resistance on that part. The mother-in-law is going to protest against the separation of her son from her because it would mean that then she has to go to the familiar and despicable (for her) situation of the hierarchical supremacy of her husband. She would lose the power that she enjoys over both of you and she would fear that her son would form an allegiance to you instead and that would be her loss. Therefore, she would convince her son that it is not in the best interest for him to separate. She would probably use the mechanism of guilt, possibly have some physical symptoms like chest pain and fall in physical health as a mechanism of inducing guilt. So, it would be an uphill task for you to separate from your in-laws. So, before you try separation, the option that you could possibly try is to make your husband aware of his total submission to his mother. This you could do in the following ways. Firstly, you will have to stand up to the bully of a mother-in-law by following your independent desires than the desires that she allows to have. By showing an alternative behaviour, you could inspire your husband. It will be difficult initially because he will be ashamed that you are able to stand up to your mother-in-law while he was not. He may try to dampen this by criticizing you, by being dominant with you so that you will give up this fight and henceforth spare him his remorse and shame. He might threaten to “send you back to your parents”, might threaten divorce and separation. He may pick quarrels with you on small matters and try to belittle you,  but this reactions are actually to stop you from the fight and to distract you. But fight on. The second task, is to be able to build a rapport with your husband so that he will be able to turn away from his mother to you. You will have to look at those desires in him which are not supported by his mother and provide an environment for them to surface. You will have to revive his youth and vitality so that he can recognize the pleasures that he can get from them instead of chipping away at the gossip with his mother. You must take him out of the house more often, mingle with friends and have a lot of parties which arouse his desires to have a couple interaction. The third intervention is to restore the hierarchy of the family system through a more interactive role of the father-in-law. No body seems to pay attention to him as your husband and your mother-in-law have ganged up against him and reduced him to probably half the man he might be. You should start respecting his views and giving him a proper position in the family events. This would entail him to see things more rationally and help stop the tyranny of his wife, make your husband a little relieved that there is some one to take care of his mother and shift his affections to you. You might also enlist the help of your parents in this. They could probably also talk to your husband and make him aware of the problems that you are facing. They might be able to convince him of the change that he needs to make and that opening may be what you might need to start these whole proceedings. You may also try and enlist the help of the extended family and other elders in the family from your in-laws side too. This process should stop you from feeling abandoned. You should evaluate the approach of your husband to these interventions before you take the decision to separate. It is not a quick-fix approach as you are dealing with problems of many years.

Many people have lost their equilibrium in the riots and trauma like the earthquake. Many…

I am Sandeep Patel, a junior manager in an accounting company associated with the government.…

I am Gauri Rampal, a student of the 12th class. I am facing the board…